I'm turning the blog over today to my writer pal, Kai Strand, where she'll be chatting about "world building." Crikey! I have a hard enough time trying to build a household! Anyway, here's Kai:

In a way, this book, BEWARE OF THE WHITE, began with world building. In a post on Mayra Calvani’s blog, I talk about the inspiration behind the story and how dreaming up that one little character – a Molly – made me think…

Where would you find a Molly?
Who would use this Molly?
Why?

When I sat at the computer to start writing BotW, I already knew I had to get Terra underground to use the adorable transportation animal I dreamed up. So I imagined a well-disguised trapdoor in her yard that opened to a long dark stairway. I realized that even at the bottom of the stairs, there would still be a long trip ahead to get deep into the earth. That is when Terra and her Introguide, Hermie, hop onto a Molly.

Having used the initial inspiration so early in the story, I had a lot more world building to do. I had to take into account why Terra was being escorted to the underground city, what role she was supposed to play within the city and how it could get screwed up so that the story was worth reading. Then I had to build a world around it.

Terra comes into contact with so many different creatures as she moves through the new alien city. I had the most fun dreaming them up and figuring out their place within the community. I imagined how Terra would react interacting with creatures. Like when she wasn’t too thrilled about shaking hands with a slimy skinned creature, but hid her concern when she noticed Frank’s hand remained slime free after his handshake. As is always the case with fantasy, so much of the world building got cut in the editing process. There was one classroom in particular that I told my editor I’m making sure gets into the movie version of BEWARE OF THE WHITE (wink.) It was so cool – but didn’t really move the story along.

When building a world – whether it be fantasy or contemporary – it is important that you be present alongside your characters to step through the paths and jump over any obstacles and most importantly to make sure everything there belongs and each reaction and interaction is noted. For example, a Trepidus named Finny, visits Terra in her school. He is an Underworld creature and it was important to note his reaction to the Outerworld girl’s bathroom because even though a middle school bathroom isn’t a foreign location to us, it certainly is to Finny.

In the end, this alien Underworld location of Concord becomes so important to Terra, she is willing to risk her life to restore its peace. The only way to make certain the readers understand Terra’s motivation is to make them understand why she loves Concord so much. It is crucial your reader fall in love with the location if it is the threatened entity of your plot. Show them why it is worth protecting. Make them want to visit too. 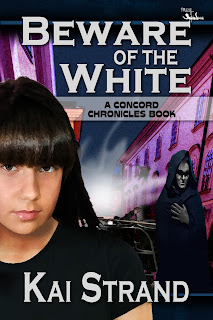 As is tradition, Terra learns on the Saturday past her twelfth birthday that she is a Natures Spirit. It is her legacy to serve in the peaceful underground city of Concord. Learning she is named in a prophecy and being threatened by the leader of the death tribe…that part breaks tradition.

The Trepidus are the death janitors of the Underworld, responsible for delivering fatalities with a smile and cleaning up after themselves until Blanco, recent leader of the Trepidus, decides the day of reckoning for his species is coming. He begins organizing the creatures and leads them toward an uprising. The prophecy says there is one person who can stop him. Terra.

With Spirit of Security, Frank, protecting her, Terra attempts to complete her training and discover her Spirit talents. Together, they go on a rogue investigation to learn how to defeat Blanco. In the end, it comes down to a battle of the minds. The future of Concord is at stake. Will Blanco, the older, more experienced being win? Or will Terra, the young, new Spirit earn back the peace of the city?

MuseItUp
Amazon
Barnes & Noble
Kobo
Or look for it on iTunes
<!--[if !supportEmptyParas]-->

Kai Strand writes fiction for kids and teens. Her debut novel, The Weaver, was a finalist in the 2012 EPIC eBook Awards. She is a (very lucky) wife and the mother of four amazing kids. The most common sound in her household is laughter. The second most common is, "Do your dishes!" She and her family hike, geocache, and canoe in beautiful Central Oregon, where they call home.

To find out more about Kai’s books, download companion documents, find links to her published short stories and discover all the places to find Kai both virtually and in person, visit her website: www.kaistrand.com. She loves to hear from readers, so feel free to send her an email or visit her facebook page, Kai Strand, Author.

To celebrate the launch of BEWARE OF THE WHITE, Kai Strand has awesome book related prize packages. Be sure to enter to win. And return again and again to claim entries as you qualify. Kai will also have Spontaneous Giveaways during her book tour. Those giveaways won’t be announced so be sure to follow Kai’s tour. Only virtual stalkers will have the opportunity at all the fun!
a Rafflecopter giveaway
Posted by Stuart R. West at 8:42 AM