Elspeth the Living Dead Girl is here! Look out!

I'm excited about my fifth book, Elspeth, the Living Dead Girl. In many ways, it was the most challenging book I've written.

Why, you ask? (Or maybe that's just the voices in my head asking. I really should seek help, I suppose, but I digress.) Not only is this the first time I've tackled a female protagonist, but you get two for the price of one! Two teen narrators. "But, Stuart," I hear you asking (again with the voices), "aren't you a 53 year old male?"

I certainly am. And that's why it was a challenge. Not only because of the female protagonists, but the two girls couldn't be more different. To start, one's dead, one's not. 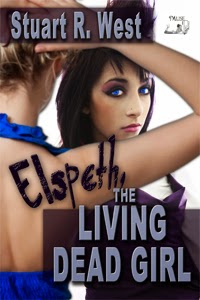 Here, maybe my blurb will make it clearer:

If you’re dead already, can you die again? Elspeth’s been summoned from limbo. Her new assignment? Track down the culprit in the mysterious death of a student at Clearwell High. And incidentally, uncover the identity of the new drug dealer prowling the halls. Only one problem—the body she has to co-inhabit has a different agenda. Elizabeth just wants to be prom queen, marry Prince Charming, and graduate with perfect posture. Both girls, alive and dead, will have their separate worlds rocked before the killer is unveiled. Nothing is as it seems. No one can be trusted. Being dead has never been so dangerous.

Did I pull off these two very fun-to-write voices? You be the judge. The book's a paranormal comedy, an emotional drama, a murder mystery, a suspense thriller, and it attempts to tackle today's high school drug issues in what I hope is an entertaining manner. I also slipped in certain things that terrify me. I can't tell you what those issues are because they would amount to a heaping pile of spoilers (the only thing I left out is being naked in class, a recurring nightmare...but there's always the next book). Feel free to psychoanalyze me after you read the novel.

You might want to bring a tissue to the party, too.

And at MuseItUp Publishing:
https://museituppublishing.com/bookstore/index.php/young-adult/ya-dark-fiction/elspeth-2c-the-living-dead-girl-detail

And tonight, Friday, June 27th, check out my Twitter chat, sponsored by my publisher, at 10 pm Eastern, 7 pm Pacific and 9 pm Central time. Use hashtag #Elspeth to ask questions (I'm not afraid of dumb questions, either. Bring it!) and for a chance to win a free e-copy. 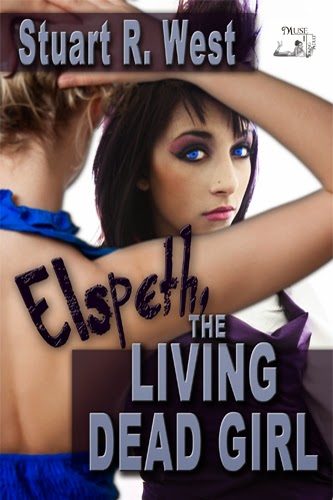 It's not going to be pretty.

The Treadmill Is My Sworn Enemy

I hate the treadmill. Yet I try and get on it three to four times a week. Obviously I must be some sort of masochist, because, honestly, how else do you explain how something so horrendous is supposed to be good for you? Pure agony. 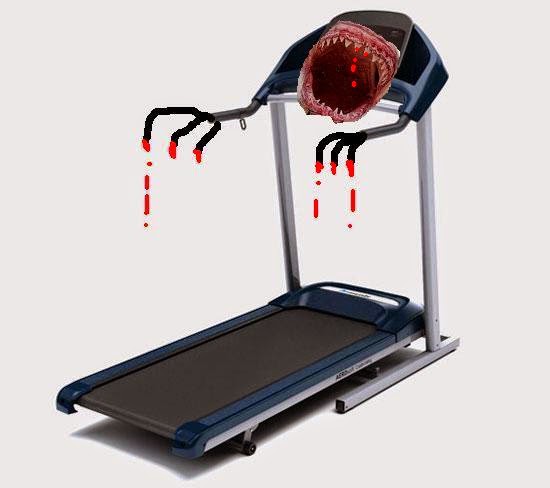 Every morning I wake up, knowing I should exercise. "Just five more minutes," I tell myself. It's particularly hard to rouse on those dark Winter and Fall mornings when the only ones up are insomniac serial killers and vampires. Yet, eventually, I get up.

You know, the magical number of "50" is usually a milestone to be celebrated. The human body, on the other hand, has very different ideas. If there's a party being thrown, it's purely a pity party, the body mocking its host all the way to the grave. It's like one of those charts detailing the state of our economy; the one with the arrow plummeting down into the red zone.

Anyway, after twenty to thirty minutes on the "monster machine," I'm done. And it's not pretty. Buckets of sweat roll off me. I look like a wet T-shirt contest reject (doubtful I'd garner any votes, but you get my drift--just, um, stay downwind because I smell like canned spam). My heart is galloping to burst through its cage. I'm leaning over the cursed machine, panting, hyperventilating like a pneumatic air compressor. My back hurts. And my knees! Oh, my knees! When I walk, they emit an unhealthy squelching gelatinous sound. I swear it sounds like aliens replaced my kneecaps in the middle of the night with fish bowls.

The worst part? After all this torture, the treadmill's electronic face taunts me, registering joy that I've burned off a mere 100 calories. 100 lousy calories. If I were to eat a half of a medium-sized donut, I'd break even. Any more food over the day, though, puts me back over the top. The demonic treadmill is laughing at me

You know, there's gotta' be a more pleasant method of exercising. Maybe I'll try yoga. Now...where's that leotard?
Posted by Stuart R. West at 6:54 AM 2 comments:

Here's the deal. In the next book I write, I want to have a stand-up comedian be the lead character. The problem is, writing stand-up comedy patter is hard. Part of the problem, I think, is writing funny stuff doesn't read as well without the nuances, pauses, different voices...delivery.

I consider myself a relatively amusing person. Of course my wife would disagree, but then again her poor suffering soul has to put up with my perceived "wit" on a daily basis. Her usual response doesn't evoke much confidence in my mad comedic skills. If they gave out gold medals for eye-rolls, she'd be mounting that dang podium. Serious good eye-rolls. Several orbits around her brain, then her eyes finally settle on me with an exhausted glare.

So I put it out to you. Let me know if this is funny or not. Keep in mind this is my character ranting, not myself. Oh, and as a back-door fail-safe, I should mention he's not the best stand-up comic around.

So. I have a daughter. She just turned eleven.

She bugs the crap outta' me with a lotta' tough questions.

"Because it's prettier then brown."

"Why did you divorce my mom?"

"Because murder's not nice."

Anyway. I love her more than I can say. I just don't like her too much. I know, right? Parents? Let's hear it.

The other day we were sitting in the park. A couple of goth kids walked by us...the whole white mime make-up caked on, chains dragging like they lost their dogs, everything.

My daughter says, "Dad, look, vampires. I didn't think they came out in the day."

"You just said it's not nice to make fun of people!"

Okay. There you have it. Is this of the sucky variety or does it not sucketh (and not in the vampirish way)?
Posted by Stuart R. West at 5:19 PM 6 comments: