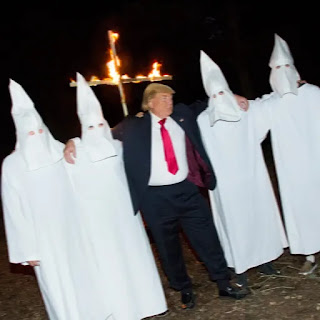 Say there, Mr. Average American! How are you? Looking quite dapper, I see. Say, is all this nonsense about the fear of Joe Biden turning our country into a socialist one getting you down? Is it putting the fear of oppressed, privileged white men into you? Don't worry your purty lil' head, Mr. Average American! Because that's all it is...nonsense. It's typical fear-mongering crap meant to further divide our country and the one behind it all is, of course, the Manchurian Cantaloupe.

With the impending, looming, fateful election day around the corner, I'm afraid it's time for me to get up on my Twisted Tales soap-box once again. But the last time I veered into these dangerous waters I got into trouble. SO, I promise to behave (fingers crossed). Sorta (not really). Scout's honor (I was a Scout drop-out). 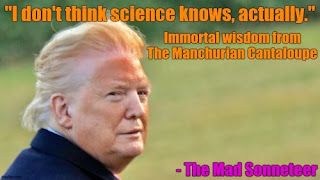 My wife and I were talking the other day about racism. As much as I'd like to lay the blame for its terrifying rise on President Klandalf, my wife says he didn't start it. But he's made it worse. Hell, yes, he has. He's out there fanning the cross-burning fires at this very moment. In fact (as I once told my mom), do you guys know why Trump has such a fabulous orange comb-over? So he can cover up his "666" birthmark, of course. (My mom just stared at me in spooky silence.)

To watch the recent preposterous "debate" between Forrest Trump and Biden was stomach-churning. Especially when Trump pronounced "I've done more for black people than any president since Lincoln." My God, I wonder what it's like living in his delirious, delusional, orange world built on flagrant lies. In the same debate/debacle, Trump more than tossed in with the heinous "Proud Boys," giving them a rallying cry of "stand down, but stand by." What kind of message is this supposed to give Mr. Average American? Sounds to me like a cry to pick up arms against those of different color. 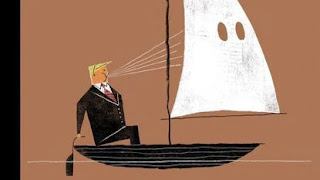 Frankly, it scares me how much a lot of the country is reverting to racism. Years ago, in my naivete, I nearly cried when Obama was elected as the first black president. Why? Because I was really proud of our little country, pulling up its big boy britches, and finally--FINALLY--casting aside their racist blinders. I thought we'd turned a corner and would never look back around it.

As my wife and I discussed the terrifying rise of racism (MUCH more frightening than Trump tossing around words like "socialism" to scare Mr. and Mrs. Average Joe), she said it's systemic. Recently, a black man held a door open for her. She replied, "thank you, sir." A few minutes later, she wondered why she went with "sir," instead of the usual chipper,"thanks!" Was she wrong? Was it a bit of a reaction to some of the recent self-searching and anti-bias conversations that have been going on lately? Clearly, we all have a lot to learn, as we realize how we can all be part of a systemic problem of society.

Maybe we should just be nicer to everyone. I'd love to get to the point where this is the case. 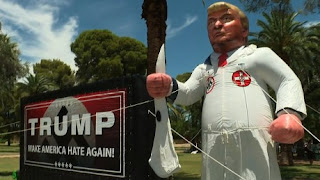 But what she'd described is what I'd been going through for years. I used to go out of my way to smile at black people, speak to them, do everything I could to make up for the crappy-ass way they'd been treated throughout history. I started young on this well-intentioned, but misguided, path. In sixth grade, when I began to reject my parents' shackles of racism, I went out of my way to befriend the new (and only) black kid in school.

My daughter and I recently discussed this topic as well. She said, "Did you befriend him because you felt like he was an outsider and wanted to make him feel better or because he was black?" Really good question. I thought about it, finally said, "Because of both, I think, but mostly because he was black." And part of me wanted to make it all about me, have my own "black experience." Yeah...now that I write about it, it doesn't sound that great.

Furthermore, I went on to tell my daughter that I guess I'm trying to make up for the sins of past generations. I said, "Sarah, your great great grandparents owned slaves for God's sake!"

She said, "Racism exists. But I grew up in a melting pot of a school where color was never hammered into us. It didn't matter and wasn't a big deal. My first job was at a Montessori school where most of the kids came from a different cultural and ethnic background. Difference in skin color was never mentioned. Kids don't care what color you are. Dumb adults do. Don't lay your white guilt on me, pops! My generation doesn't have anything to atone for. That's all on you guys."

Well. Yes and no. I do see an improvement in their generation regarding how they view people of color and those of different sexual leanings. But it's important to learn from the past. Furthermore, I believe there are are conscious or subconscious biases in all of us. And it's up to us to stop it. 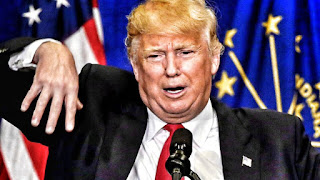 So get out and vote. It figures that it took a man of orange color to further divide people of different colors in our country. Don't let this happen again. VOTE!

There. I'm done now. Don't make me come over there.