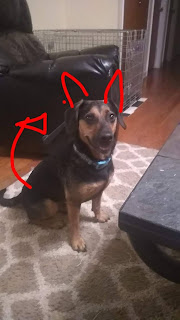 Some years back, when my daughter was just a wee lil' lass, I vaguely remember her watching some awful cartoon series on Nickelodeon, called "Cat-Dog." Other than finding the titular critter very creepy, and the show awful, I don't remember much about it, except that I can still belt out the incredibly, annoying ear-worm of a theme song (although in terms of horrific children's entertainment songs, NOTHING beats that damned, infernal "Baby Shark." GAH!). 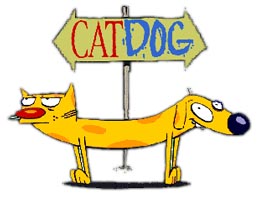 Little did I realize that a "cat-dog" exists in real life. And my daughter owns him (or maybe he owns her, but we'll get to that). Unlike the cartoon character, he doesn't have a cat head on one end of his body and a dog head on the opposite end (which begs the question, just how did the animated Cat-Dog go to the bathroom?). No, my daughter's pet looks like a dog, but shares some very eerie cat-like traits. Kinda creepy at times.

Stealthy as a Hollywood ninja, Baron creeps around my daughter's house as if wearing slippers. Suddenly, he'll fly up in the air to land on the highest point of furniture around, where he'll roost like a cat. The amazing thing is he doesn't even need a running start. Just leaps up like the most agile cat around.

And he'll watch me. Oh, yes, he'll watch me. Plotting against me, wondering how he can drive me crazy next, perhaps scaring me into a heart attack or barking me into insanity. Because that's what Baron's all about: he's an evil genius who wants to take over the world and rule. He's just biding his time, waiting for the perfect opportunity...

Don't believe me? Check out this chilling video footage:

I know, right? And as we all know, everything you read or see on the intronets is true!

I have further confirmation from an internet source, Wagwalking.com. They write that dogs are territorial and will protect their space where they're comfortable. Furthermore, if they've settled on a spot above you (hello, Baron!), then they believe themselves to be a notch superior to you in the evolutionary chain.

See what I mean? Plotting against humanity. You guys have seen the Planet of the Apes movies, right? Beware the furry interloper in your house, people! They're plotting--like cats--to take humanity down!

Speaking of dangerous furry interlopers, my book, Corporate Wolf, is chock full of werewolves in perhaps the only corporate satire, horror, black comedy, suspense, thriller, murder mystery around. So get yourself a copy and parade it around town so you can show folks what a trendsetter you are. All the cool kids get it right here. 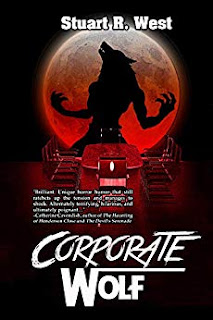