Under the Thrall of the Witch of Oz 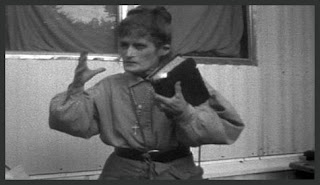 My daughter lives in "Oz."

No, that's not the real name of the place, nor is it the HBO prison where love reigns, and I haven't lost the ability to differentiate between fiction and reality. It's a sorta, sometimes nickname for the lil' small (but big on charm!) town in which my daughter has decided to set her roots.

As a banker, her job is varied, which I guess is kinda par for the course for small towns. She runs the gamut of doing banking chores, personal crisis counseling, and scoping out plots of land for customers to bury bodies on. But the most curious thing she does is run errands for the town's crazy lady.

One time while visiting, she told me she dreaded going to work tomorrow. I asked her why.

"Because I have to go on a grocery run for...(honestly, I can't think of her name and even if I could, I wouldn't publish it) 'Mabel.'"

SOOOO many crickets. My brain ground through rusty cogs and wheels and gizmos. "But...but...but why are you going to get her groceries if she's not a customer? And even if she was a customer, isn't that going beyond the realm of good customer service?" (Side note: this small and quaint town is soooo small and quaint, it doesn't have a grocery store. You have to go to Walmart in the next town over. There're three tattoo parlors, three nail salons, 800 churches, and a bar, but no grocery store!)

"I don't know," she said. "It's just something everybody does!"

"WHAAAA? And she's not a customer??? But...but...what strange witchery is this?" 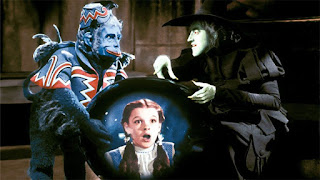 The witch of Oz's back story gets even weirder/stranger/awesome, depending on how you view it. Once, when my daughter's boss went to her house because she beckoned, she answered the door without any pants on. And one day she came into the bank with no eyebrows.

"Someone broke into my house and burnt my eyebrows off," she explained with a straight face and no eyebrows.

But my daughter (and a lot of the town's members) often go on errands for her, hauling a 20 pound bag of potatoes up two flights of steps. Sorcery!

Here's the best part: the woman pays my daughter off in ice cream drumsticks! (Where does she get this endless supply since they're never on her shopping list? Perhaps she's a rich, eccentric drumstick heiress.)

Yes, through either sorcery or subtle psychological manipulation, Mabel has the town do her bidding, and while under her thrall, her minions are helpless as they scramble to get cigarettes and TV dinners for her. Is she a good witch or a bad witch? The verdict's still out. Just beware of strangers bearing drumsticks.

Speaking of witches, one factors in mightily in one of the tales in my darkly comical and spooky collection of horror tales, Twisted Tales from Tornado Alley. As a matter of fact, the small town in which this peculiar tale is set is very similar to "Oz." Could it be...a TRUE STORY? 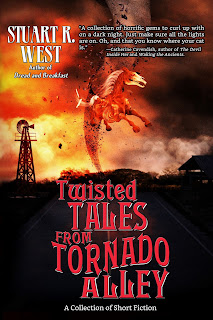